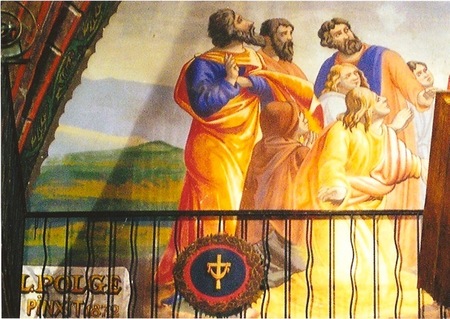 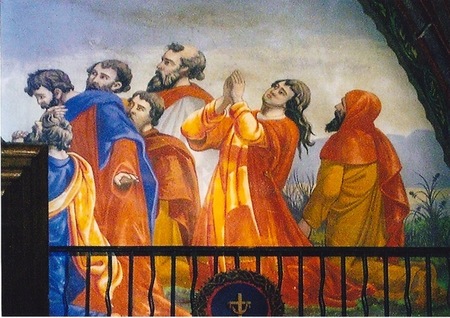 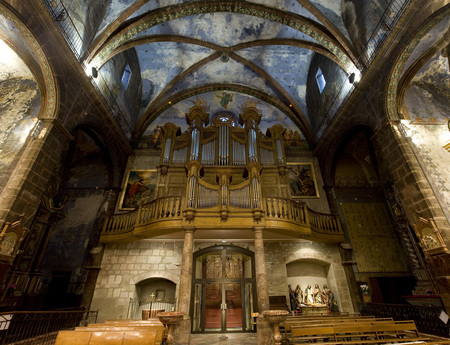 Let’s take a look at the mural paintings on the vault and walls of the chapels.

The painter, Léo Polge, was born in Alès in the departement of Gard, in 1832.

He studied in Paris to be a painter and decorator. He was able to start this work as soon as 1865, as he was living in Perpignan. The parishioners of Prades’ church commissioned him and met the cost. He came to live in Prades only from 1868, when he married Espérance Marty, who originated from there.

Paintings were signed in 1872.

It thus represents 7 years of work for the artist and his workshop.

It has to be reminded that the church is dedicated to Saint Peter, considered as the first Pope of catholic church. The insignia of papacy are therefore to be found : the tiara and the keys, that always come along with the representation of this Saint, whether in a painting or a statue.

The Tiara are the headgear given to the Popes during their crowning (since Pope John Paul I, Popes refused to wear it so as not to appear as absolute monarchs).

In Léo Polge’s paintings, it is interesting to note that the tiara and keys are carried by angels which are not always identical. They don’t look alive neither by their shapes, nor their color and are not of equal quality. It is obvious that Léo Polge did not work on his own but that in his workshop, he entrusted several workers with certain tasks, with more or less success.

One can point out that concerning the church of Céret, which is also dedicated to Saint Peter, the painter Viguier, in 1863, made a totally different choice regarding the colors.

The vault of the big nave is unfortunately in a very bad state at the moment.

It represents the blue canopy of heaven, sprinkled with golden stars. All the arches are decorated with a very elegant frieze of foliage.

Further, behind the wrought iron guardrail, and above the 14 chapels, the vault displays decorated panels, either with a biblical scene, or with the insignia of papacy. The latter are reproduced 3 times on each side.


The apostle is so much posessed by Christ, that he relives the event of Ascension, exactly as it is said in the Gospels.

- Saint Peter, dressed in green, is in the centre of the painting IN ASCENSION.

- 2 groups of angels give an impression of going with this ascent to heaven.
- clouds surround the scene
- Underneath, on either side, 13 apostles, some of them surprised, others praying, all dressed with much colored clothes so as to point out this happy event. The 13th apostle would be Saint Paul (act of the Apostles, Chapter 8, Verse 28).

The same evocation is to be found on the vault of the Saint Peter’s church of Céret.

Eventually, to the left side of the pipe organ balcony, can be read the signature of the painter : « L.POLGE pinxit 1872 ».

ON THE LEFTHAND SIDE OF THE NAVE (facing the main altarpiece)

« And straightway he constrained the disciples to enter into the boat, and to go before him unto the other side, till he should send the multitudes away. And after he had sent the multitudes away, he went up into the mountain apart to pray: and when even was come, he was there alone. But the boat was now in the midst of the sea, distressed by the waves; for the wind was contrary. And in the fourth watch of the night he came unto them, walking upon the sea. And when the disciples saw him walking on the sea, they were troubled, saying, It is a ghost; and they cried out for fear. But straightway Jesus spake unto them, saying, Be of good cheer; it is I; be not afraid. And Peter answered him and said, Lord, if it be thou, bid me come unto thee upon the waters. And he said, Come. And Peter went down from the boat, and walked upon the waters to come to Jesus. But when he saw the wind, he was afraid; and beginning to sink, he cried out, saying, Lord, save me. And immediately Jesus stretched forth his hand, and took hold of him, and saith unto him, O thou of little faith, wherefore didst thou doubt? »

We can notice the wind of panic blowing on board. Jesus can be spotted, wearing a red tunicle and blue toga.

Saint Peter standing up in the middle, dressed in orange and green. It seems to be Saint John embracing him to his left, with long and bright hair, white stole. Who are the three characters kneeling?

- To the very right , a little sailor is standing near the mast, sliding the sails down, seems to be smiling.

- On the opposite side, a small child, pouch on shoulder, is witnessing the scene. This scene is the one described by Saint Matthew (Chapter 14, Verse 33) but applied to the Christ. Why this change of color? Is it about an identification with Christ, as on the large fresco located above the pipe organ? A roundness delimits the scene.

ON THE RIGHTHAND SIDE OF THE NAVE (facing the main altarpiece)

Everyday, a lame man was left before the Temple, to allow him to beg for charity to the people coming in. Peter, here dressed in green, was present with John (in pink and white, chestnut brown hair, always depicted as a young character). Peter told the beggar : «  Look at us, neither have I gold nor silver, but what I have, I give it to you. Get up and walk. », taking his hand, he lifted him up and he walked.

« Peter went to the housetop at about the sixth hour to say his prayers. He felt hungry and was looking forward to his meal, but before it was ready he fell into a trance and saw heaven thrown open and something like a big sheet being let down to earth by its four corners ; it contained every kind of animal, reptile and bird. A voice then said to him, « Now, Peter, kill and eat! ». This was repeated three times, and then suddenly the container was drawn up to heaven again. While Peter's mind was still on the vision, the Spirit told him, "Look! Some men have come to see you. Hurry down, and do not hesitate to return with them; it was I who told them to come" ».


Léo Polge represents the 3 men, on the bottom-right of the painted scene and our character dressed in green, is quoted as Saint Peter.

« so that the sick were even taken out into the streets and laid on beds and sleeping-mats in the hope that at least the shadow of Peter might fall across some of them as he went past. »

Otherwise it may be (Act of the Apostles, Chapter 10, Verse 23) Peters’ Vision :
« Then Peter invited the men into the house to be his guests. The next day Peter started out with them ».

About the paintings on the walls of the chapels :

They are all different but have in common to show the expression of the symbols of the Saint venerated in each chapel.

Every chapel’s ark is outlined with stylized flowers friezes or Greek friezes, bright colored.
They are all different and testify to a great work of creation, executed by a great artist. Comparable friezes can be found in Catllar’s church where the painter worked in 1869.

Let’s take the same course, beginning with the chapels on the lefthand side of the main altar, and then the ones on the right.

On a wall : The apparition of the Virgin at Lourdes in the grotto of Massabielle. Quite recent event as it took place in 1858, thus 7 to 8 years before the execution of the paintings. The emotion of this moment is still pregnant. The painting is surrounded by fleurs-de-lis (lilies) and a shower of stylized diamond-shape images can be noticed.

On the opposite wall, it is Saint Dominic having received from the hands of the Virgin a crown of pearls symbolizing the Rosary ; he passes it on to the Dominican monks. This scene might have occurred in Albi.

Let’s explain that the Brotherhood of the Rosary was created in our departement, by the Dominicans during the 17th century.

A shower of scapulars, as let’s not forget that it was the Carmelite nuns who went back to the use of cilice and scapular.

Cilice : spiked belt worn by nuns next to the skin by way of mortification

Scapular : piece of monastic costume made of 2 patches of fabric worn as undergarment

Chapels on the righthand side :


The Virgin appeared to 2 children who declared « having seen a beautiful Lady with a strange dress, speaking in French and dialect. She was sad et was crying because of the impiety of the Christians ».

Here the painter pictured her dressed in white and wearing a cloak brimmed with roses, and walking on a carpet of roses, with her arms crossed and wearing a gold diadem.
We know that the 3 white marble characters were signed by DELARUE and were made in 1867, that this group of statues cost 1.200 francs and that the landscape in the background was made by Léi POLGE for the sum of 190 francs. We can make out a frame of palms and a shower of small orangey round objects. (that could not be named).

In order to symbolize the Trinity, the painter tied up 3 little green branches that pour in a shower.
On either side, can be found the portraits of Saint Rose of Lima and Saint Teresa of Avila, which are much more ancients.


We nevertheless have to point out the fact that excess was carried to the point of painting the pillars that are doubtlessly made of stone (or marble) in an imitation of marble from Ria.

The painter’s descendant, Mrs Rose-Marie Parpiel, emphasized in her conference about her great-grand-father’s paintings, that it was a recognized fact that imitations, trompe-l’oeil paintings were a speciality of Léo POLGE, and that the people from Prades commissioned him to paint as « imitated marble » their mantlepieces, even when they were made of stone or wood.

Let’s remind that these mural paintings, which nowadays appear old-fashioned, used to be in the style of the 19th century religious paintings. Today, they look very dark and damaged.