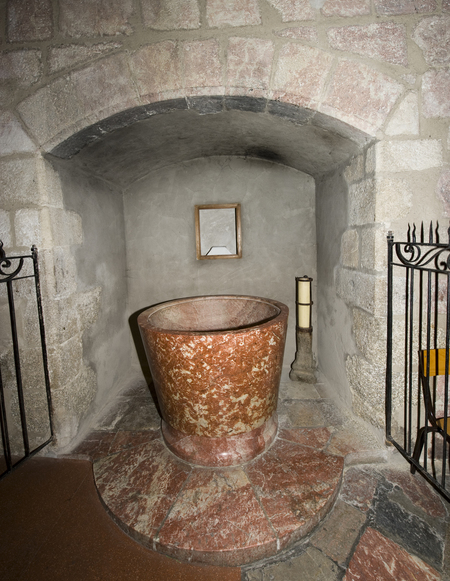 Saint Sebastian is to be found on the keystone and at the top of the alterpiece, but in the first place the chapel is de facto dedicated to the Pietà dating back from the XVIIIth century.

In the altarpiece’s lateral niches, Saint Joseph and Saint Dominic can be recognized.

In Narbonne, Languedoc, Saint Sebastian's Church marks the location of the house where was born, during the 3rd century, the patron saint of archers. Originating from Milan, Italy, the family of Sebastian destined him to a military career. He succeeded and besides became appreciated by the emperor Diocletian who put him in charge of hunting down christians from Rome and delivering them the death blow.

Sebastian found some christians but let himself get converted by them! Given away, he was sentenced to death, shot with the arrows of his comrades-in-arms. He survived of his wounds, rescued by a christian widow and as soon as healed, went back to the emperor and reproached him for his crualty towards this people whose only crime was to adore a God that he did not recognize.

Furious, Diocletian got him killed straightaway. Thrown into the common sewer, Sebastian’s corpse was collected by christians and piously buried in the catacombs of via Appia, Rome in 288.

The History of Saint Sebastian inspired a lot of painters and composers throughout the centuries.

Saint Sebastian is to be celebrated on the 20th of January.

In the corner, between Saint Sebastian’s chapel and the baptismal font can be read on a gravestone : « Hic jacet Domina Sperança Coder et Lacreu. Obit 30 ? bris 1737 ».